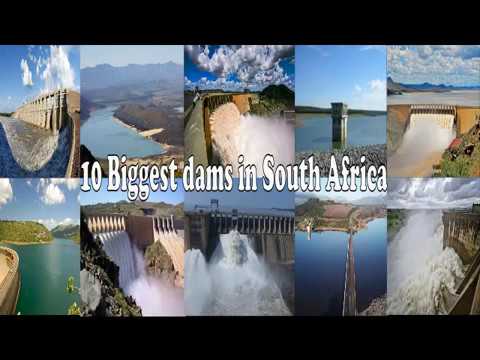 A dam is an artificial barrier constructed to stop or restrict the flow of water or underground streams.

They are mainly used to mitigate flooding and to store water for activities such as human consumption, irrigation, aquaculture, and industrial use.

Reservoirs created by dams do not only reduce floods but also provide and supply water for activities such as irrigation, human consumption, industrial use, aquaculture, and navigability.

This is the largest dam in South Africa. It is built near the town of Norvalspontnot far from Eastern Cape and Free State provinces.

It’s principal purpose is for irrigation, domestic and industrial use as well as for the generation of power. Its height is 88 m, and its length is 914 m, and the concrete used in its construction is about 1.73 million m3.

The dam was originally called the P.K. Le Roux reservoir before it changed to the Vanderkloof Dam.

It is also fed by the Orange and Berg Rivers as well as two streams. It is situated about 81 miles (130 km) away from the Gariep reservoir and is the second largest in the country. Vanderkloof has the highest wall whose height is 108 m and can hold 3,187.557 million m3 of water.

This dam is the third latest reservoir in the country. It is located close to the Harrismith town in Free State and constructed by the Department of Water Affairs.

The reservoir was redirected from Tugela River following the shortage of water in Johannesburg in the 1960s and 1970s. It has the second highest wall that measures 93 m (305 ft), and it is the largest earth fill reservoir.

This dam is constructed on the Vaal River and is also fed by the Wilge and Klip rivers and Grootspuit, and Molspuit. It is located 77 km south of the OP Tambo International Airport. It is also the fourth largest by water capacity.

Pongolapoort Dam/ Lake Jozini Located about 280 km north-east of Durban, the Pongolapoort/ Lake Jozini is constructed on the Phongolo River which is its sole perennial feeder.

It is formerly known as Oppermansdrif Dam, the Bloemhof reservoir is constructed at the convergence of the Vall and Vet rivers. It is situated along the border of the Free State and North West provinces.

It is located in Western Cape, the Kruismansrivier reservoir is constructed along the Kruis River. It was opened in 1992 and the Department of Water Affairs and Forestry runs it.

The wall has a height of 18 metres, extends across a surface area of 18 Ha, and the reservoir holds up to 1,500,000 m³. It is used for irrigation, and the hazard potential of this water is also considerably high.

The Theewaterskloof reservoir is built on the Sonderend River that is situated close to Villersdorp in Western Cape. It holds up to 480 million cubic meters of water and is the leading supplier of water in Cape Town.

The reservoir occupies a surface area of 48 km2. In addition to domestic use, it is also used for industrial purposes as well as irrigation.

The Greater Brandvlei is an amalgamation of the original Brandvlei Dam and the Kwaggaskloof Dam in 1989.

It is built on a tributary of the Breede River, and it is primarily used for irrigation. The dam’s wall has a height of 21.5 m, and its length is 1250 m.

This earth-fill reservoir that was opened in 1986 is located in Mpumalanga. It impounds the Assegaai River and the Department of Water Affairs and Forestry runs it.