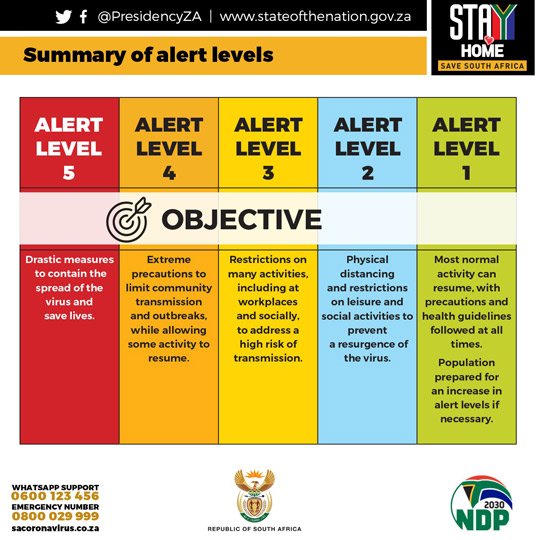 President Cyril Ramaphosa addressed the nation on Tuesday and the outcome of the meeting is that South Africa has moved to alert level 3 of the lockdown, in other to curtail the spread of COVID-19, as there’s been a surge within the past few days.

“In view of the rising infections, we have therefore decided to move the country to Alert #Level3. This will take effect later this evening once the regulations have been gazetted,” he said.

The president states all that is expected from each citizen of the country.

Alcohol sales for on-site consumption will be permitted as per licence conditions up to 9pm. Alcohol consumption in all public spaces, such as beaches and parks, is strictly prohibited.

Night vigils, after-funeral gatherings and ‘after-tears’ gatherings are not allowed. – The sale of alcohol from retail outlets for off-site consumption will only be permitted between 10am and 6pm from Monday to Thursday. This excludes public holidays.

South Africans are urged to put on their nose mask, as it’s an offence for anyone who refuses to abide by the law.

Speaking about vaccination, Cyril said: “The supply of Johnson & Johnson vaccines was held up by an investigation into contamination of ingredients at a supplier factory in Baltimore in the United States.

“After the AstraZeneca setback, the Johnson & Johnson vaccine appeared to be the best option for our country as it protects against the variant, because it requires only a single dose and is easier to store and transport.”

“Until now, our mass vaccination programme has therefore had to rely on the Pfizer vaccine, which requires two doses. Nevertheless, 480,000 health workers have received the Johnson & Johnson vaccine to date as part of Phase One of the programme.”

President Cyril Ramaphosa to address the nation today
Kuwait: Return of expats may further delay due to discovery of ‘Delta’ variant
Advertisement