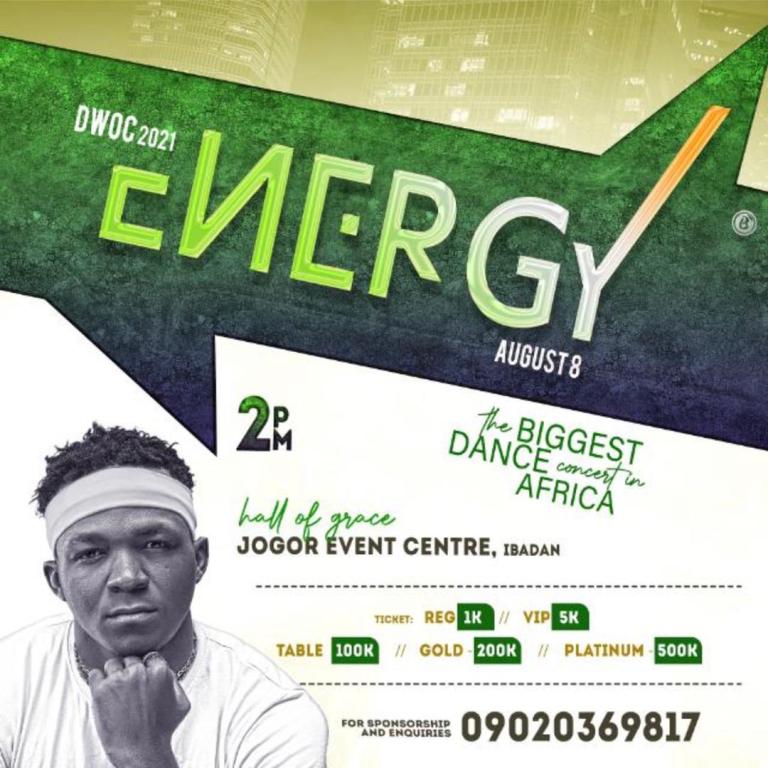 In the Nigerian dancing and choreography industry, Agboola Olatundun has been one of the emerging dancers who is characterized by his fearless, confident and versatile nature.

Speaking with him was as interesting as it was eye-opening; he really is an authority in his field.

He discussed with TROG World Media his educational background and the “biggest dance concert in Africa”, Tagged “ENERGY”.

While speaking with the Media outlet, he explained how he developed fierce passion for dancing, with gusto, he goes, “Dance is my other half.

Watching Michael Jackson while growing up, he inspired my first love and since then, it became so difficult for me to part with the act”. He joined Royal Dancers in 2005 which marked a significant push towards the path of a professional dancer and since then, he has been gathering a lot of buzz.

He also spoke about the need to be consistent in whatever one does and how it’s those who stick to the end that make the most out of a craft.

He has worked with varieties of well-established Artistes in Nigeria which include but not limited to, Zlatan (Unripe pawpaw), Chinko Ekun (Able God), Yinka Ayefele MFR, Yetunde Are etc

Furthermore, he sheds light on the “biggest dance competition in Africa”, ENERGY which is proudly powered by DWOC (Dance With Olatundun CMHouse). This event had its maiden edition in 2019 and it was a banger! The event took us through the chronicles of dance and the different eras and cultures that affected such! It was a movie!!!

Sadly, the event couldn’t hold in 2020 owing to the coronavirus pandemic, but they are back this year; bigger and better!!!

Dancers from different genre such as Mad Magnificent, Tiwapel, Richie Emmanuel etc will be around same as widely established artistes such as Oladips, Yetunde Are, Babatunmise, Dare another level and theatre performances from the Egba Theatre International amongst others.

In rounding up, he explained that he faced several criticisms from his peers asking him to quit his dancing career to pursue and find another passion and work, he described how this didn’t take any toll on him, rather, it turned out to be motivation.

Asked about his future in the next coming years, Olatundun’s target is to be the biggest dancer in Africa in the four years.
He cites Kaffy, Kenny Blaq as the mentors he has idolized over time.

Continue Reading
Advertisement
You may also like...
Related Topics:Oladotun

BBNaija: Why I feel betrayed by Emmanuel – Liquorose
Mpho Letsolonyane reflects on what growing up means to her
Advertisement