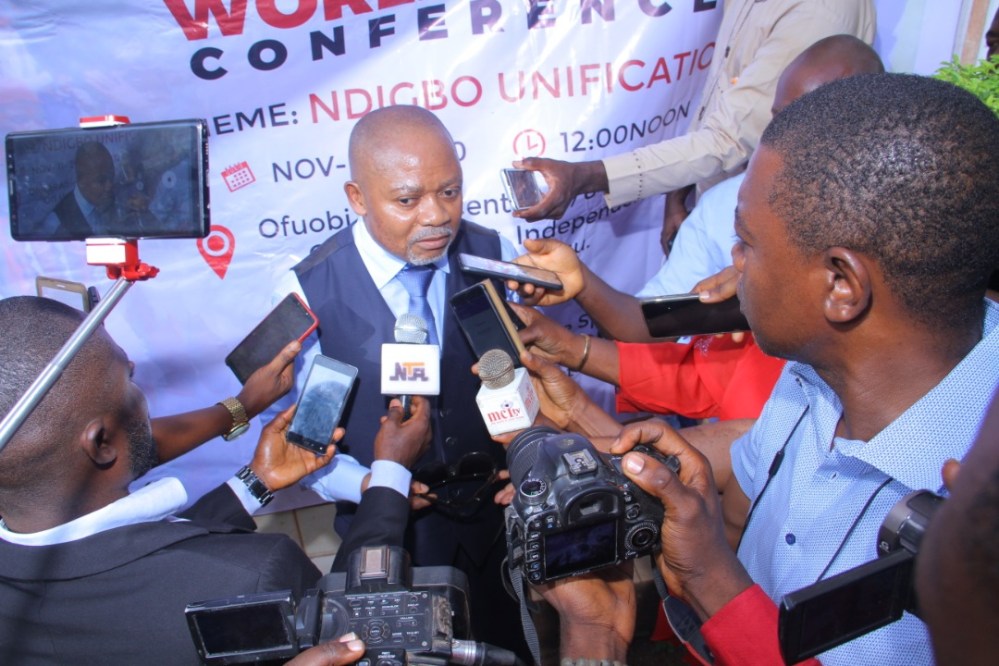 Indeed history was made penultimate Wednesday in the ancient coal city of Enugu when an Igbo socio-cultural group, Ndigbo Royal Heritage Worldwide, NIROH kicked off officially with a world press conference.

The event which took place at the Ofuobi African Center at within the Independence layout of Enugu had the President General Dr Paul Okoye and the representatives of the entire Five South Eastern States of Abia, Anambra, Eboyin Enugu and Imo State as well as Abuja and Lagos in attendance.

The colourful event featured the presentation of a position paper titled: Igbo Unity …the New Agenda by the President General Dr. Paul Okoye who flew in from Italy specifically for that purpose. In that paper, he stressed the need for the Igbo Race to Unite and speak with one voice if they wish to make a formidable impact in the union called Nigeria.

According to him, The Eastern Region, like her counterparts in the North, West and Mid-West, existed as an administrative region with full autonomy, controlling its economy until 1967.
The Eastern Region operated a parliamentary system of government with Dr Francis Akanu Ibiam as the Governor and Dr Michael Okpara as the Premier. The autonomy enjoyed by the four regions of Nigeria was to be watered down with the introduction of the unitary system of government into our polity by Major General Thomas Umunnakwe Aguiyi-Ironsi on assumption of office in July 1966, following Nigeria’s first coup.

Hard Truth!
He stressed further the genesis of the Igbo man problem; “it has nothing to do with the campaign of hate and calumny, flying around. Power corrupts and absolute power corrupts absolutely. It has nothing to do with white, black, Asian coloured or what have you. I want to submit preliminarily that there is too much power wielded in the hands of one individual in our present state, and that diffusing them will not be a bad way to start”.
On the creation of States as it affected the Igbo unity, he had this to say ; ”The creation of the states brought in division, lack of cohesion in the pursuit of the interest of the Igbo people and the fragile oneness that once existed, became finally dilapidated. The Igbos have lost focus and direction in steering the ship of what used to be a prolific nation. The egalitarianism of the Igbos has turned a blame game. Today, we blame Tom, Dick and Harry for lack of potable water, meanwhile water exists under our feet. All we need to do is dig the ground deep enough to get water. A bad workman, they say, always quarrel with his tools”.

Describing the Igbo Nation as being in tartars, Dr Okoye said the unity of purpose of these five states is the primary objective of NIROH worldwide.

For those who believe that Igbos originated from Jews, here what he had to say “As a custodian of the cultural heritage of Igbo Nation I want to say emphatically without mincing words that Igbo are not Jews. With due respect to Israel for their rich cultural heritage the origin of over 80 million people cannot be rooted to a country with a population of 8.6million people. The contrary should be the case. That said I consider it an absolute exhibition of complex ad-infinitum for us to be concerned with our root when Ghana is thinking of a space station.”

He concluded with a monumental rhetoric on Unification by condemning blame games.
“We therefore must stop the blame game and get back to work. Only fools don’t change their mind. There are no known living saints. All hands therefore must be on deck to leave a bequeathing legacy for the succeeding generation. We have come to heal the land.

The solution therefore is not in this senseless hate campaign that has not brought us any good; rather it breeds disharmony and lack of faith in the nation. We all directly and indirectly participated in the destruction of the fundamentals of this great nation and we all therefore have a role to play in the rebuilding of this nation that is the hope of the black race world over.

The future of our youths and the nation have been sacrificed for our political interests. The north, the east, the west and the south are together in wrecking this country. It is an illusion therefore, to speculate that the east can survive without the west or north and vice versa.
The solution is the healing of the land and we have come to lead the campaign. I have come to heal our land.”
Indeed the Igbos all over the world can now heave a sigh of relief.