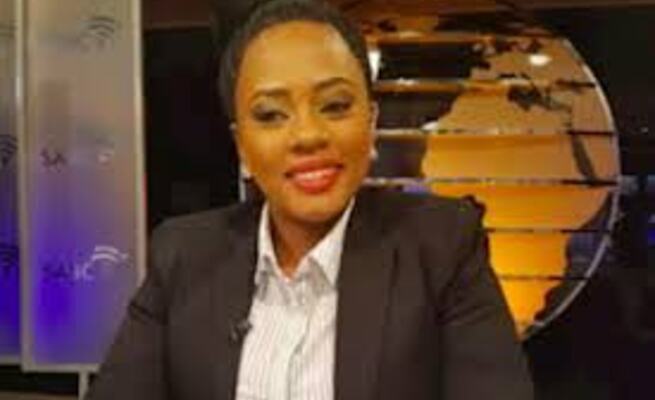 Morning Live and SA today news anchor Palesa Chubisi dared SABC CEO Madoda Mxakwe to remove her while live on air on Wednesday morning after she defied the SABC’S instruction not to return to work.

The news presenter was served with a termination letter by the SABC last week while she was live on air, indicating that her appointment was found to be irregular. But the Labour Court ruled in her favour and ordered her immediate reinstatement.

PHCityHype has learnt that 21 other employees whose names also appeared on a list of irregular appointments were served with similar letters despite the SABC having failed to win its court application at the labour court in which the public broadcaster attempted to review the appointments.

According to the court judgment, the SABC was ordered to immediately reinstate Chubisi. It was also chastised for its handling of her dismissal, with the court indicating that it was done in a way intended to tarnish her image and to embarrass her live on TV.

However, despite this groundbreaking judgment, which also paved the way for the reinstatement of the other SABC employees who were dismissed with Chubisi, the SABC wrote to the news anchor’s lawyers and told them that she must not to set foot at work.

The letter from their lawyers, R Masilo Attorneys, dated November 3, which Sunday World has seen, reads: “It’s our client instructions that your client should not report for duty until our client has had an opportunity to properly study and consider the judgment.”

But Chubisi opted to defy the letter on the advice of her lawyers, MT Raselo Incorporated. She returned to work and insisted that she wants to be air. Her lawyers also indicated that they were disappointed by the public broadcaster’s decision not to comply with the court order.

The law firm said that Chubisi would be reporting for duty and said that should the SABC block her instead of assisting her to do her work, it would be in contempt of court and there would be consequences.

Two senior news staffers privy to the drama said on arrival at work on Wednesday at 10am, Chubisi told the executive producer that Mxakwe must come and remove her in person after she was told that they were not expecting her to come to work.

Chubisi, the news staffers said, reminded her bosses that the SABC was in contempt of court by blocking her from coming to work when she was reinstated by the court.

Broadcasting, Electronic, Media & Allied Workers Union (Bemawu) president Hannes du Buisson has also written a letter to the SABC demanding that after the Chubisi judgment, its members who were also dismissed after being told that their contracts were not recognised, must also be reinstated, failing which the union will head to court.

Chubisi’s lawyer, Moeketsi Raselo, confirmed that there was resistance by the SABC for his client to work when she reported for duty on Wendesday.

“We wrote several letters to them demanding that they allow her to work, and they eventually allowed her to” said Ramoketsi, who also indicated that they threatened to take legal action for contempt of court.

SABC Spokesperson Mmoni Seapolelo confi rmed that the broadcaster told Chubisi not to report for work through her attorneys pending the appeal proceedings. She said the SABC has fi led an application for leave to appeal the judgment at the Labour Court.