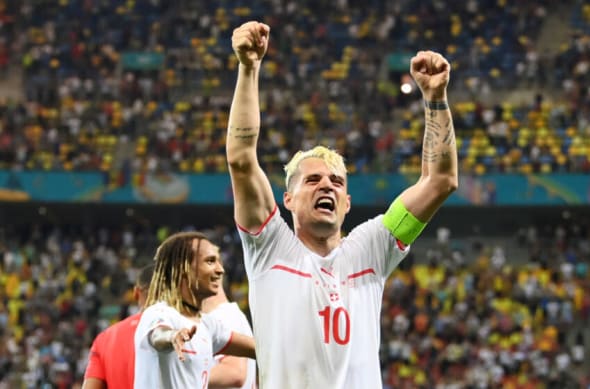 As per a report from Calcio Mercato, Juventus have entered the race to sign Arsenal midfielder Granit Xhaka.

The Swiss international appears to be on his way out of north London after five impressive seasons. He had been linked with Roma for a long time, but a new club has made an effort to sign the 28-year-old.

According to the report, Juventus will come after the Gunners star if pulling off a move for Manuel Locatelli proves to be too difficult. Xhaka has an agreement in place with Roma, but the Italian club are some way away from finding a solution with Arsenal.

Calcio Mercato state that the Giallorossi are yet to increase their bid of €12m + €3m with the north Londoners wanting €20m. They report that the Swiss captain is okay with waiting for Roma but that he also likes the option of Juventus.

As per the report, Xhaka’s representatives are aware of the interest from the Old Lady and are not willing to wait forever for Roma. And according to Chris Wheatley of Football London, Roma are confident of signing the player despite Juventus entering the fray.

It is good for the Gunners to have a bidding war for one of their stars as it drives the price up. And based on the midfielder’s unbelievable performance against France, they should be confident of getting the fee they want.

As for Roma, they have the pull of Jose Mourinho but a failure to reach an agreement with the north Londoners can allow Juve to sneak in. That would be quite an anti-climax to see a player they have been linked with for so long, slip away from their grasp.

For the Gunners, they are in a stronger position as there is another team in the mix and could be willing to pay what the English side asks. The Swiss maestro is capable of producing wonderful performances, but it may not be in north London anymore.

The other upside of Juventus being interested in Xhaka is that it opens the door for the north Londoners to sign Locatelli, a player they are reportedly targeting. We will have to wait and see who is willing to give Arsenal what they want.