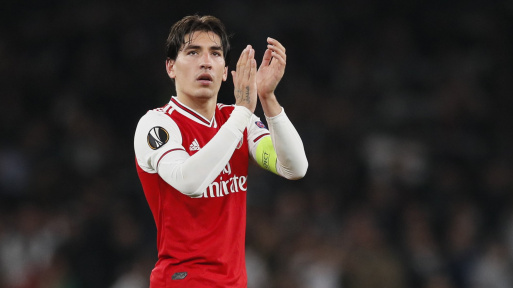 Arsenal defender Hector Bellerin is being targeted by Inter Milan as per a report from Italian outlet Gianluca DiMarzio.

The Spaniard is currently the longest-serving player for the Gunners and has been an integral part of the team for years. But his time in England seems to be coming to an end as the full-back has been linked with a move away.

According to the report, Inter are looking at Bellerin to be a replacement for Achraf Hakimi who is on his way to PSG. The Italian giants would prefer a loan deal that includes an option to buy.

DiMarzio state the Gunners have placed a valuation of €20 million on their defender and if a deal does not go through, the Milan club would look to Davide Zappacosta, who spent last season on loan at Genoa.

And after reports of Inter’s interest in the 26-year-old came out, Chris Wheatley of Football London stated that the player’s options are Spain and Italy. Bellerin will decide which country will be his destination this summer.

It would be good on the part of the Gunners to raise some funds through the defender’s sale. Calum Chambers was preferred as the right-back towards the end of last season as it appears that the Spain international is not part of Mikel Arteta’s plans.

If the interest from Inter can be turned into a loan that has an obligation to buy, it would be the ideal solution. The Nerazzurri will benefit from signing the Spaniard as he is a player that suits their style. New manager Simone Inzaghi likes the use of wing-backs and Bellerin excels in this role. The slower nature of the Italian league will be perfect for the former Barcelona man.

The Spaniard has been a great ambassador on and off the pitch for the Gunners. Though it would leave a hole in the defence, the north Londoners can take a new approach to their right-back area in his absence. Bellerin is increasingly likely to leave and if Arsenal can negotiate a good deal, it bodes well for their transfer plans.