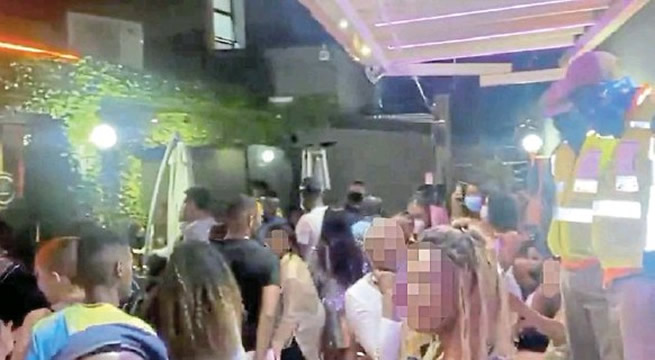 A Sandton nightclub was shut down and employees of a Midrand adult entertainment venue fined early on Saturday morning for violating lockdown laws.

The SAPS, the Johannesburg Metropolitan Police Department, Gauteng traffic police and various other law enforcement agencies found more than 300 patrons at Blackdoor Lifestyle Lounge in Sandton after the midnight curfew.

Footage taken during the bust shows the nightclub filled to capacity, with not many wearing masks.

JMPD spokesperson Xolani Fihla told Sowetan ’ s sister publication TimesLIVE that the law enforcement agencies were cracking down on entertainment establishments operating after the midnight curfew when police found no social distancing at the nightclub.

“We found that Blackdoor was operating after midnight. Alcohol was confiscated. We didn ’ t arrest anyone because the owner was not on the premises, ” he said.

He said the owner would face a fine.

Fihla said police then made their way to Bryanston, but found that nightclubs in the area had been after the current regulations.

However, in Midrand, at XO Lounge, formerly known as Teazers, police found employees still on the premises after midnight.

We found that while XO was not operating, there were still employees on the premises. Under the current lockdown regulations, no-one is allowed to be out beyond midnight without a permit,” Fihla said.

The employees were taken to the police station where they had to pay a R1,000 fine each to be released.

Fihla could not confirm the number of employees that were fined.