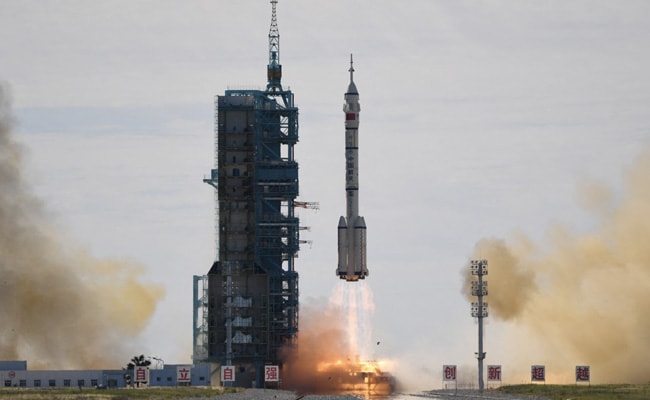 China has launched three astronauts into orbit to begin occupation of the country’s new space station. The three men – Nie Haisheng, Liu Boming and Tang Hongbo – are to spend three months aboard the Tianhe module some 380km (236 miles) above the Earth. It will be China’s longest crewed space mission to date and the first in nearly five years.

The astronauts, already wearing their spacesuits, were seen off by space officials, other uniformed military personnel and a crowd of children waving flowers and flags and singing patriotic songs. The three gave final waves to a crowd of people waving flags, then entered the elevator to take them to the spaceship at the Jiuquan launch center in northwestern China.

The mission brings to 14 the number of astronauts China has launched into space since its first crewed mission in 2003, becoming only the third country after the former Soviet Union and the United States to do so on its own. Two astronauts on those past missions were women, and while this first station crew is all male, women are expected to be part of future station crews.

The launch was broadcast across state media, from take-off until they reached orbit, with internal shots of the cabin where the astronauts smiled as some items floated in zero gravity around them.

During the mission the astronauts will conduct two spacewalks more than on any previous mission and run various experiments including testing a new robot arm, and regenerative life support systems.

The Chinese space agency is planing a total of 11 launches through to the end of next year, including three more manned missions which will deliver two lab modules to expand the 70-tonne station, and supplies and crew members.

Beijing said in March it was also planning to build a separate lunar space station with Russia, and this week the two countries issued a “roadmap” for potential collaboration opportunities.