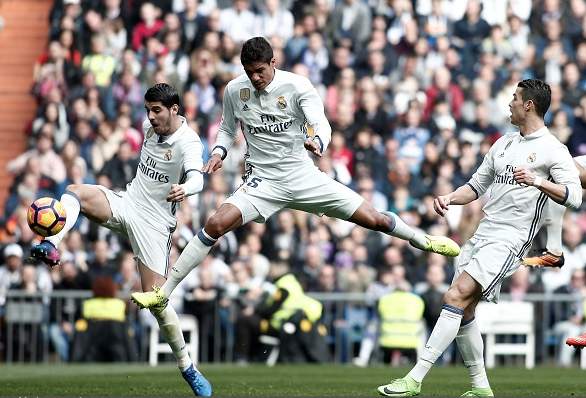 Raphael Varane is yet to respond to Real Madrid’s contract offer, with a move to Manchester United or Chelsea seemingly in the offing

That’s according to MARCA, who cover the Frenchman’s future today as he looks to be closing in on a move away from the Bernabeu.

They explain that with a year left on his current deal, Varane has been offered a new contract by Real Madrid, with that proposal sent to him several weeks ago.

He has not responded to the offer since it was sent, and so the feeling in the Bernabeu is that he will be bringing his ten-year stay at the club to an end.

If that is to be the case, his future looks increasingly like it will be in the Premier League and Manchester United are very keen to get him.

They are not the only option on the table, though, with Chelsea having ‘emerged’ as contenders in recent weeks as well.

The third option, PSG, does not seem to be a concrete one anymore after they signed Sergio Ramos, and Varane would prefer to move to the Premier League anyway.

If Real Madrid are to sell, which is increasingly being forced upon them, they want it to happen this summer to avoid losing Varane on a free come next year.

His ‘market value’ is €70m, but the fact he is in the final year of his current deal means that will be reduced.

His good performances for France, despite their early exit from the Euros, means that he has ‘maintained his cache’ in the eyes of his suitors, such as Chelsea and Manchester United.

Those clubs seem ‘immune’ to the effects of the economic crisis and so could give Madrid the money they want to sell the Frenchman.

As far as the Spanish club are concerned, every little helps as they are trying to balance the books before making a big Galactico level signing.

Varane, for his part, is motivated by the idea of earning more money, but that is not the only factor in his thinking as he wants to ‘broaden his horizons and try new experiences’ both of which would be on offer in the Premier League.