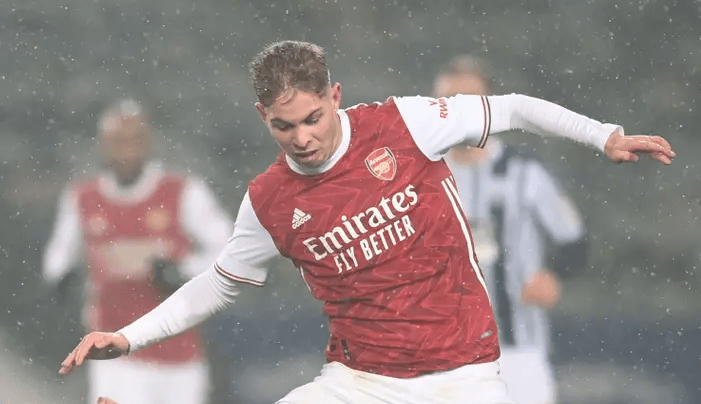 Arsenal just announced on their club website that they have signed Emile Smith Rowe to a new long-term contract.

This puts months of speculation to rest on whether the midfielder will commit to the Gunners or not. There was interest from fellow Premier League club Aston Villa who even made a couple of bids which proved to be unsuccessful.

Smith Rowe has also been given the coveted No. 10 which has previously been worn by the likes of Dennis Bergkamp, Robin van Persie, Jack Wilshere and Mesut Ozil. Speaking about the extension, manager Mikel Arteta had this to tell the club website:

“As we all saw last season, Emile is an intelligent player with excellent ability. His sharpness on the turn and exceptional vision have already made him a key player for us. His attitude and willingness to learn have also been very impressive.

“Huge credit to our team in our academy who have given Emile a great education and have worked superbly to help with his development through the age groups. Along with the first-team staff, huge credit also goes to our senior players, who have played such an important role to help Emile develop, gain confidence and perform the way he did last season.

“I know the fans will join us in being delighted that Emile has committed his future to the club. We’re now looking forward to helping him develop further and seeing him become even more important to the strong young team we’re building.”

It was extremely important for the north Londoners to extend the 20-year-old’s contract as otherwise, it would have reflected badly on them. This was especially necessary given the interest in the player.

And based on the second half of last season, it was clear to see just how important Smith Rowe has become to the team. The fortunes of the Gunners took a turn for the better after they introduced the midfielder.

In the upcoming season, a lot more will be expected of the youngster who will have to share more of the creative burden. But from what we have seen so far, he is someone who is definitely up to the challenge.

Arsenal have taken care of an important part of their transfer window and can now look forward to bringing in more players. This is to improve the squad and add to the likes of Smith Rowe.

Tammy Abraham to Arsenal: Do the Gunners need him?
Five alternatives Arsenal can sign instead of James Maddison
Advertisement