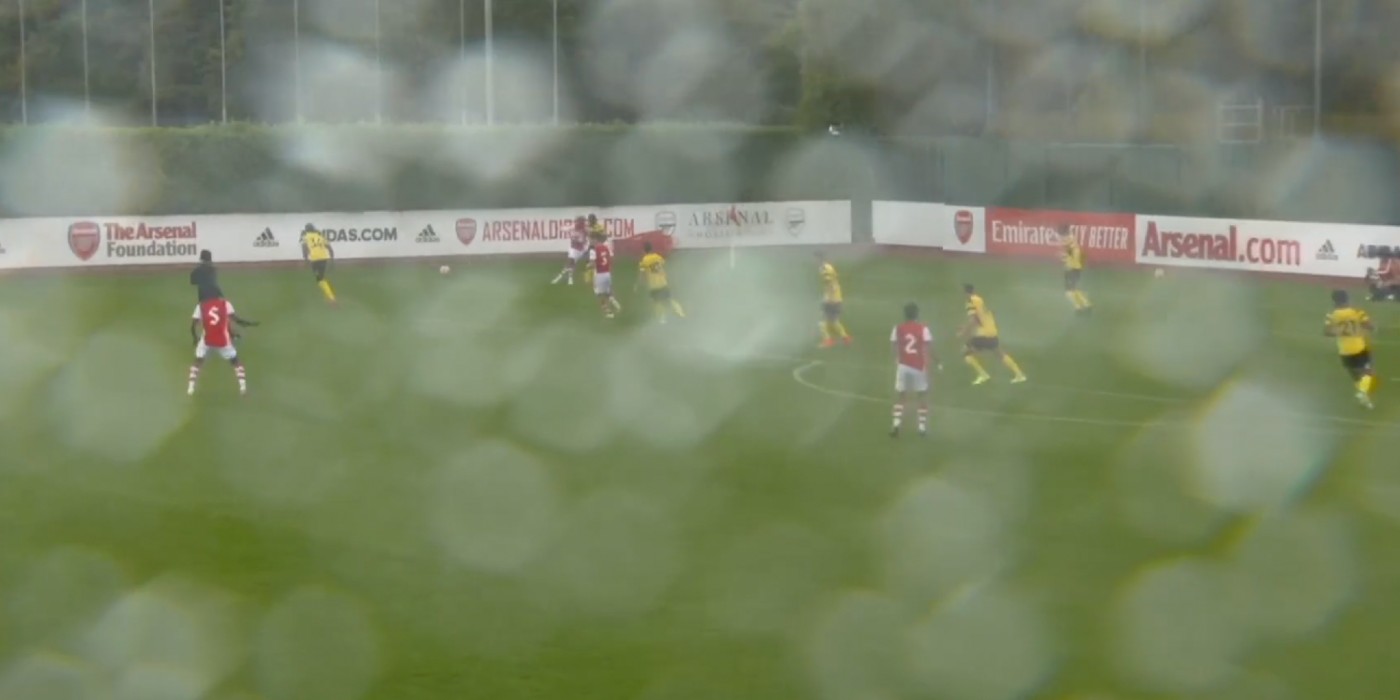 Yesterday Arsenal beat the new Premier League outfit Watford 4-1 at London Colney behind closed doors yet again, the second game to be played in London instead of Florida after the USA tour was cancelled.

It was Arsenal who broke the deadlock first in 15 minutes when Eddie Nketiah who had switched to the left-wing in a 4231 rather than left forward in a 442 that he was playing on Saturday against Milwall. New signing Nuno Tavares started the play who moved it into the feet of Willian. Willian did the only thing that he does best which is using the through ball pass to put Eddie Nketiah in behind the defence. Eddie then cut in from the left and on the edge of the box finessed it past Daniel Bachmann.

There were multiple chances after including a very similar chance in the same sort of position for Nketiah who’s well-drilled shot was saved by Bachmann this time.

But it was Arsenal doing Arsenal type things that allowed Watford back into the match half an hour in. Bernd Leno found himself with the ball in his possession in an awkward position, played it to Mohammed Elneny who succumbed to the high pressure that the Watford attack consisting of Philip Zinckernagel, former Bournemouth man Josh King and star winger Ismaila Sarr had set out. Elneny was dispossessed yet again and this time Zinckernagel was there and had all the time in the world to place it past Leno for the equaliser.

A quick free kick taken by Nicolas Pepe in the 67th minute shocked the Watford defence and Christian Kabasele alarmingly brought down Ainsley Maitland-Niles in the area and the referee awarded a penalty. It was Alexandre Lacazette who stood up to the task and calmly slotted the ball into the bottom right to retake the lead.

Only seven minutes later and the Gunners found a third when Emile Smith-Rowe found Kieran Tierney in the box who had an easy tap in as the ball rebounded off the Watford keeper. The goal came quickly after the Scotsman had riled up the Watford defence as they seemed to have got into an argument which Mikel Arteta had to restrain Tierney from moments before.

With ten minutes to go, it looked like Arsenal could have had four when Lacazette’s attempt curled just onto the outside of the post, completely beating the goalkeeper. But it was academy prospect Miguel Azeez who did make it four, with an outstanding first goal for the senior side after picking the ball up on the outside of the box and curling it into the left of the goal from long-range.

Thomas Partey could have had his first goal for Arsenal when Emile Smith Rowe backheeled it into his path with four minutes left, but the goalkeeper denied him with a great save to prevent the Ghanain from his first goal for the club.

Bernd Leno– Made some good saves but was at fault with the Watford goal as he was caught taking too much time on the ball. 6
Cedric– Gave the ball away too many times- shouldn’t be starting as reports suggest against Brentford. 5
Calum Chambers– Played well in the CB position and was in the right place at the right time. 7
Pablo Mari– Good distribution as always, and no real flaws shown. 7
Nuno Tavares– Caught for pace a few times understandably by Ismaila Sarr but good distribution to the attack especially for the first goal. 6
Albert Sambi Lokonga– Impressive. Good positioning, awareness, passing and tackling. All you ask for in a central midfielder. 9
Mohamed Elneny– Very inconsistent. Too much time on the ball and lost possession easily. At blame for the first goal. 5
Willian– Surprisingly alright but still a bit lazy. Got an assist for the first goal and his passing was his best feature. 6
Reiss Nelson– Just completely non-existent. Not on the ball, not making off the ball runs, nothing at all. 5
Pierre-Emerick Aubameyang– No-one passing to him- no goalscoring opportunities. As simple as that. 6
Eddie Nketiah– When used as a left-winger played much better. Beautiful individual goal. 9

Alex Runarsson– A very dominant half and a few saves. Maybe interested a few clubs. 6
Hector Bellerin– Provided good support to attack and wasn’t caught at the back. 7
Rob Holding– Solid distribution to the midfield which was also very strong reflected well on his performance. 7
Kieran Tierney– Playing in a LM spot and a goal to his name- couldn’t ask for much more. 8
Sead Kolasinac– Average. Didn’t play too well and not too bad. Was caught a few times which is negative but can be improved. 5
Thomas Partey– Great dominant presence in the midfield- good distribution and good dribbling into attacking areas. 8
Miguel Azeez– First goal for a senior Arsenal side and it was a lovely goal indeed. 8
Emile Smith Rowe– Livened up the game with great off the ball running and good positioning. 8
Ainsley Maitland-Niles– Played slightly better in a more attacking role. Won the penalty for Lacazette to score. 6
Nicolas Pepe- Great dribbling and good positioning- no goal this game but still lively on the ball. 7