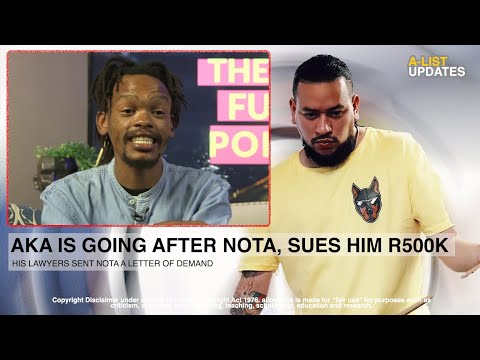 AKA is definitely not taking it easy on Nota Baloyi as he allegedly plans to take legal actions.

This is coming after Nota made slanderous claims in a form of tweets after Nellie’s passing.

He also made allegations of drug abuse which allegedly lead him to being abusive towards Nellie were made and now the rapper is definitely suing him with R500k.

Pictures, videos and anonymous letters were leaked which all suggested that Supa Mega was abusive towards his late fiancée.

Many social media users shared their own opinions about such claims including Nota who shared his in several tweets.

Taking to social media, Ntsiki Mazwai expressed how disappointed she is about AKA’s actions.

She said: “So AKA is suing Nota??? We are living in an era where you get sued for speaking the truth. What a gross abuse of the justice system we are seeing”

In a YouTube video shared by a channel called Mzansi A-Listers, they share contents of the legal papers sent to Nhlamulo.

His lawyers Mabuza Attorneys even pointed out the tweet which AKA deems defamatory and it reads,

“The man needs fixing because he is in denial about a lot of things but I would have preferred him to own his bullying of his wife, his substance abuse and his rushing into a relationship soon after his previous break ups. I am praying for him to find God and rely only on him!”

AKA’s lawyers Mabuza Attorneys said that Nota’s had stirred controversy regarding AKA’s character in order to humiliate him for his own selfish and personal gains.